This week was the 2014 Westminster Kennel Club dog show.  The Best-in-Show winner was “Sky,” a wire fox terrier, which apparently is a kind of dog.

I realize this is not exactly the kind of thing most bikers are interested in, and it makes easy fodder for satirists.  It is easy to laugh at people fawning and and investing massive amounts of time and money into these animals, which are bred out onto the thinnest branches of the evolutionary tree and would be perfectly incapable of surviving in the wild.  Seen from the outside, it’s ridiculous.  It’s like a modern version of Dutch tulipmania. 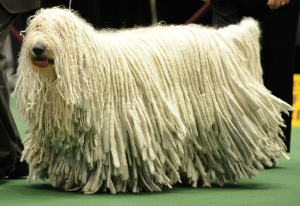 Here’s the thing: how different is this, really, from some of the “Biker Build-Off” competitions?  You have masses of connoisseurs poring over the fine points of rare, exotic breeds that bear little resemblance to their useful ancestors.  At the dog show, they’re in tuxes; at the build-off, it’s leather, but either way it is a socially enforced dress code.  Yes, it may seem ridiculous from the outside, but from the inside it is serious.  If you know what you’re looking at, you see these things differently.  You can easily become a snob, whether it’s about dogs, custom bikes, wine, classic rock & roll, or calligraphy.

When something spirals off in its own direction, it can start to take on these strange forms.  It’s like the evolutionary isolation of Australia and the resulting array of deranged fauna, or a language group that gets isolated from its mother tongue until the two are no longer mutually intelligible.  Things get over-the-top fast.  We end up with weird plumage, duck-billed dinosaurs, and slithering lichens. 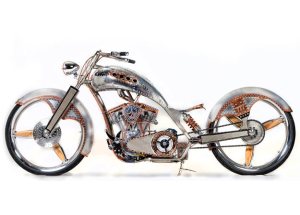 The genes that are being selected and passed on in these show bikes are not related to riding and function, but the genes for showmanship, which then get inbred and multiplied.  That’s why we have bikes that are “just rolling sculpture” or “unrideable” that so many people complain about.  These are show chickens, not fryers. 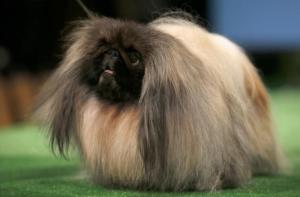 Certainly, there are show bikes that buck this trend, but even those we tend to judge as artwork.  Few things are as beautiful as a purebred Alaskan Malamute or a fine custom bike like the Little Blue BMW, but these are the examples that still show the earnest bones of their hardworking ancestors.  It’s the Lancashire Six-Legged Glass Dog or the Exxxtreme Dragon-Chopper that are the hothouse flowers that die in the sun.

Of course we want to become connoisseurs of the thing we love, but sometimes I just want to drink my damn wine in peace.